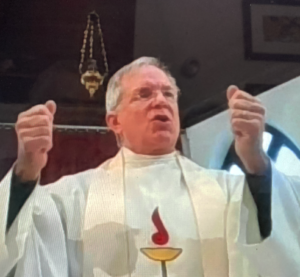 From the Sermon on the last Sunday After Epiphany

In Memory of Blessed Absalom Jones and the Fisk Jubilee Singers

At St Matthias, we have a glorious history, a tradition filled with bravery, innovation, and beauty.  The taking up the mantle of this tradition will not a burden. It is a beautiful opportunity. Each of us, all of us together, are inadequate for the task. But the Spirit of God is. And the blood of the ancestors, the genius of the builders, the strong witness of the saints in light will guide us. And when it seems impossible we will just ask for a double portion of God’s Spirit.

In Celebration of Black History Month

And In Blessed Memory of Paul Robeson

The Prophet Isaiah said long ago: “those who hope in the Lord will renew their strength. They will mount up on wings as eagles; they will run and not grow weary; they will walk and not faint.” He could have been speaking of Paul Robeson.

A few weeks ago as I was thinking of how to honor Black History Month at St. Matthias, I received a video from my Irish son-in-law. It was of Paul Robeson singing to a small group of Welsh mine workers, singing the sacred union organizing hymn, “Joe Hill.” Paul Robeson was in Wales to sing at a benefit concert in a great hall in the city. But before the concert, he went out to where the workers labored, to sing for them and for their cause. He identified with their harsh lives on the margins and with their struggle for justice.

So we dedicate this service in the memory of Paul Robeson, a saint, our hero. May the life of this remarkable man, artist, this unrelenting activist for justice inspire us. Paul Robeson was the third African American to enter Princeton University in 1915. He was the valedictorian of his class and a two-time All-American in football. He earned a law degree from Columbia University, while playing in the NFL. He was a major figure in the Harlem Renaissance, an international recording, stage, and film star. Most of all he was activist for the cause of justice and freedom.

Paul Robeson was raised in a church parsonage. His father, who escaped from slavery in North Carolina by way of the Underground Railroad, was pastor of the Witherspoon Street Presbyterian Church in Princeton NJ and later a leading pastor in the AME Zion Church.

As we examine the life of Paul Robeson we will be amazed, not just by his art, but by his courage, and his refusal to shrink in the face of threat and the damage his activism had to his career.

About his art he said this:

“The talents of an artist, small or great, are God-given. They’ve nothing to do with the private person; they’re nothing to be proud of. They’re  a sacred trust… Having been given, I must give. Man shall not live by bread alone, and what the farmer does I must do. I must feed the people – with my songs.”

God of grace and justice, we thank you for giving the world a witness such as Paul Robeson. Let us be inspired by his life so that we too might pursue beauty and justice.

At the Synagogue in Capernaum Jesus heals a man with a broken and be-deviled spirit.

Then Jesus and the brothers, go over to Peter’s house to have some lunch. But when they get there Peter’s mother-in-law is in bed with a fever. Jesus goes to her and reaches out and takes her by the hand and helps her up, and her ailment goes away. Then, touched and healed by Jesus, in gratitude, she immediately begins to serve. Healed by Jesus, she begins to serve. This is the teaching moment.

Later that evening, Jesus begins to heal other sick people. And the whole town came to their door and many were healed. Another translation puts it this way: “and all the people came to be healed.”

Once there was a woman who suffered the loss of a child. Her sorrow was so great that she went to a wise teacher to ask for guidance to help her in her healing. After listening to her story, the teacher told her to go into the town, and to go from house to house, until she found a family that had not experienced grief. She did this, and as we might expect, she never found such a family. And while this did not take away her grief, it relieved her sense of being alone in her suffering and need for healing. And it caused a great compassion to rise up in her spirit, and she began to serve her fellow sufferers. Her love for others softened her grief. She was not alone.

Just as I suspect that every single one of us is broken in some way, or in many ways, and is in need of healing. We too are not alone. We’re all in this together. We all are in need of healing, whether we admit it or not.

The people come, after Jesus heals Peter’s mother-in-law. He puts her hand in his and lifts her up. This image of Jesus touching an old and ailing person, speaks to the enormous healing possibilities of Jesus’ personal touch, that extends through us. When I think of healing, I think of healing in all kinds of ways, all kinds of brokenness; broken bodies, broken spirits, broken hearts; lives broken by illness and disease, by oppression and injustice, spirits broken by grief, loss and loneliness, and hearts broken by emptiness and disappointment.

Can we imagine Jesus, or one of his helpers, taking us by the hand and lifting us up, giving us the will, the courage, and the hope, to begin to walk a path of healing and serving; to begin to walk away from the path of despair, of hopelessness and defeat. Can we imagine walking a path of healing, hand in hand with others who are in need, and then serving others who are in the same boat as we are.  We’re all in this together.  All of us are in need, described best in the old hymn:

Not my brother, not my sister, but it’s me, O Lord,

Standin’ in the need of prayer;

Not my father, not my mother, but it’s me, O Lord,

Standin’ in the need of prayer.

The people Jesus healed had one thing in common-their need. He gave hope; he lifted them in the face of be-deviling forces that would only tear them down. Will we let ourselves be taken by the hand and lifted up?  Will we open our hands, reach out, and be healed and then lift up others to healing?

Let this be our prayer: O God, your loving hand has made us in your own image, given us all we have, and redeemed us through Jesus your Son: so reach out your hand again and heal us, that we may respond in kind, offering your hope and healing to all who are broken in body, mind or spirit, that together we may be your healed and holy Body on this earth.

This we pray in the name of your son, Jesus Christ our Lord.